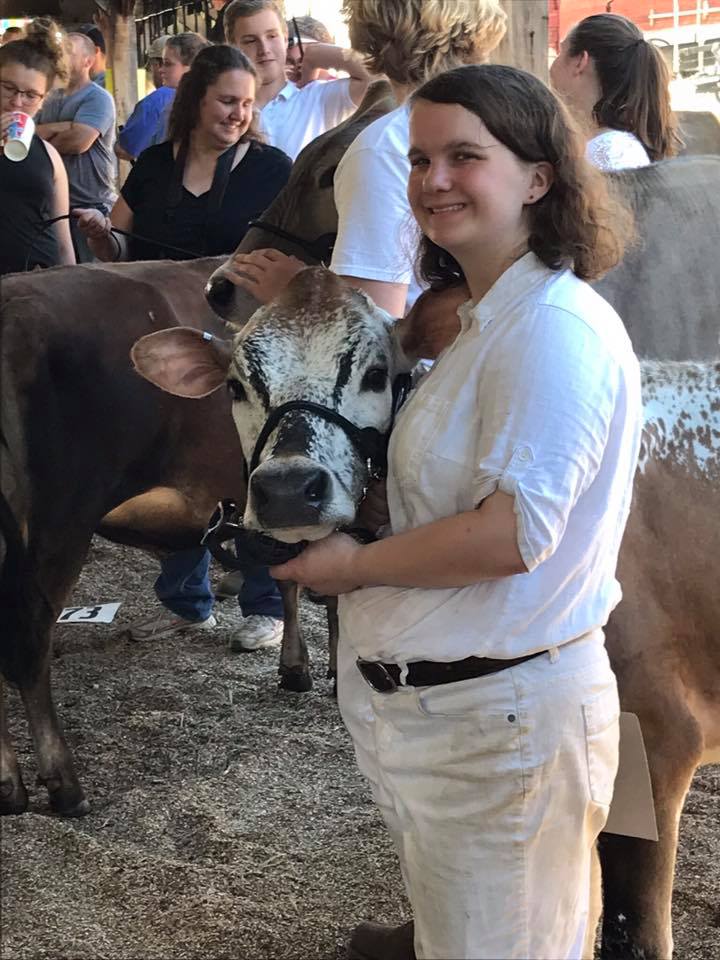 Yesterday I ended with Hazelnut’s passing and how that set up so many other things that have happened since. So to continue with my story a few days later a neighboring farm offered us another Jersey which we went and saw and then got that weekend, and I named her Acorn. And even though it was still very soon after it happened Acorn did help to make it a bit better. A little while after that, with a few months of practicing with Annabeth and Acorn I decided to claim another of the family farm’s Holsteins, mainly because a Holstein that was born at the time that I was helping to feed as I got more involved on the farm reminded me of a dog. So I registered her in my name, and I named her Bingo. During this time I also had begun to help feed the heifers and sometimes scrape off the floor if it got dirty when the cows came in before milking time. With all of this happening it gave me a bit less time to work with my show cows, but I made it work.

Eventually we had to tell the family that gave us Hazelnut that she’d died, and they felt so bad that they let us have another one of their Jerseys for free. This one I names Lilly, and suddenly I had four show cows to bring to the fair that year, which is more than I’d ever had before. It was also my first fair that I ever got any big prizes in. Annabeth won Reserve Grand Champion Milking Shorthorn that year, and it was the first time that had ever happened for me, which was really exciting. So exciting in fact that I honestly don’t remember much else that happened that year.

Also during this time my other cows were getting older and it was time for them to start having calves. Unfortunately it turns out that Katy was born with or possibly developed over time a hormone problem, meaning we had to breed her nine times before she had her first calf. So then Jasmine was born, a fully white lineback which I thought was interesting. This was in November, and a few months later in March Eclipse had her first calf, Martha. Martha was a half Jersey and half Holstein, and usually our farm doesn’t keep those but we did for the first time. Primmy also had one like that, but we sold her calf to a farm close by, but I don’t really remember why we got rid of that one but kept Martha. So with these two in mind, along with Lilly still being of a small size, these three went with me to the fair that year. Nothing as exciting as the year before happened that year prize wise, but it was my first year as a Junior Superintendent, which I think I’ve mentioned before but in case I haven’t it just means that I helped the adults take care of the barn during the week, and I got to sleep in the barn. There were many stories that happened during that time, but I already feel that this post is going on really long, so I will begin part three with that tomorrow.